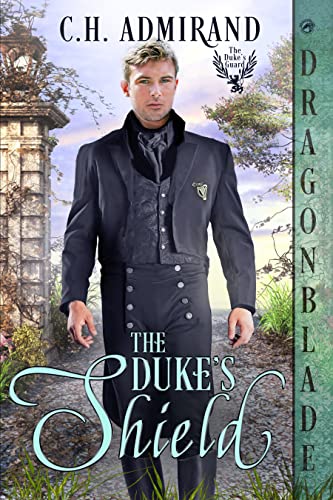 The Duke’s Shield by C.H. Admirand

The Duke’s Guard: The men in black who have sworn an oath to the Duke of Wyndmere to protect the duke and his family from enemies that would stop at nothing to discredit and destroy him!

Harriet Mayfield does not like being told what to do! She’s been keeping their tenant farm afloat with the help of her 14-year-old son, the image of his dead father, her strength, and her wits. The last thing she needs is a too-handsome-for-his-own-good member of The Duke’s Guard to ride to the rescue when a group of men arrive in the middle of the night to trample their crops and set fire to their barn!

With a hand to her side, she admits that he did arrive in time to prevent that behemoth from crushing her. What are a few broken ribs when they could have lost their farm? Maybe she could ask O’Malley to let her borrow his cousin’s .50 Kentucky long rifle.

Michael O’Malley is drawn to the feisty widow from the first. It may have started with her sunset hair and mist-laden eyes, but any Irishman worth his salt appreciates the strength of a woman who is not afraid to keep going even after the loss of her husband. Harry is the first woman he’s met since setting foot on English soil who calls to his heart while she’s butting heads with him.

When an enemy of Viscount Chattsworth threatens to ruin him, it is up to the Duke of Wyndmere’s guard stationed at Chattsworth Manor to protect the viscount and everything he holds dear.

Danger stalks in the night, but it will have to penetrate The Duke’s Shield before he will let them harm those he has sworn to protect with his strength, his heart, and his honor.

Read Free in with Kindle Unlimited!